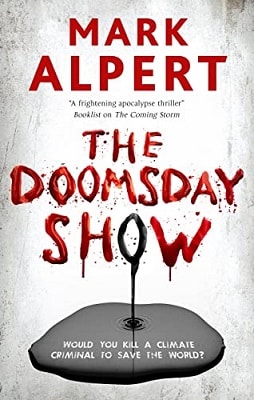 Mark Alpert, a contributing editor at Scientific American, thinks it’s time to shame climate criminals, “the executives of the fossil-fuel companies and their political allies,” he writes. “Humor and satire can be powerful weapons.”

If you’ve read any of his previous ten science thrillers, which include the international bestseller Final Theory, you know that Alpert creates rapid, tight, twisty plots driven by insightful science. His very human heroes and villains, while engaged in saving or destroying the world, remind you of your neighbors. In The Doomsday Show, Alpert also gives us comic riffs with mayhem and mishap, and witty sendups of Broadway boomer favorites like the tune “Aquarius” from the musical “Hair”:

When the Earth is badly heating up

And common sense aligns with hope

And we’ll give up that carbon crap!

This is the dawning of the Age of the Carbon Bust!

The Age of the Carbon Bust!

Those are the lyrics to a protest song written by Max Mirsky, founder of the Doomsday Company, a street-theater group that puts on political comedy sketches at environmental rallies. But is that kind of protest actually going to do anything? Alpert, anticipating our skepticism, shows us an alternative: assassinating the fossil-fuel tycoons. If one or two or three die, in an ugly painful way, might others get scared and switch to solar?

The Doomsday Show is full of gun battles and killer drones and speedboat chases across New York Harbor (you can tell Alpert has lived in the city for decades). The visual detail jumps out: “He wore an elegant suit, but his face looked like rare roast beef, and his smile was a line of gristle in the meat.”

The twist is that Mirsky’s street-theater troupe is using their creativity to stop the assassins, a group of climate terrorists who, while targeting the CEOs, kidnap Max’s daughter Sonya, an American version of the Swedish teenage activist Greta Thunberg. Sonya is among several fiery stiletto- and weapon-wielding women in The Doomsday Show, which would make an excellent gift for a teen of any gender identity.

You’ll get real emotion here, as when we read (names redacted to avoid spoilers), “He was ready to shoot the son-of-a-bitch again if he showed even the slightest hint of life….{he} didn’t come out of this murderous trance until {she} threw herself at him, pressing her wet face against his shirtfront. At that point he finally noticed how hard she was shaking and how loud she was sobbing behind her gag. He tucked his pistol back into his pants so he could wrap his arms around her and untie the knotted rag covering her mouth. She kept on crying after {he} removed the gag and while he unwound the baling wire that bound her wrists. She couldn’t speak yet, she couldn’t say a word, but that was all right, {he} thought, that was OK. Right now she just needed to cry.”

As for me, I most appreciated the nice dose of wish fulfillment in the novel, as the climate criminals, including a former president, suffer at the hands of justice. Max is especially pleased that “Congress passed a special law that dismantled Roche’s company and confiscated his sixty-billion-dollar fortune, earmarking the funds to renewable energy subsidies. And when it became public knowledge that [he] had been Roche’s executioner, he got five million new followers on Twitter.”

This is the sort of joke with a serious barb inside. That’s just one reason The Doomsday Show cheered me up as we left our earnest activists of the Doomsday Company dancing in a conga line, singing, “Solar cells and conservation…”

The Doomsday Show available at:
Amazon