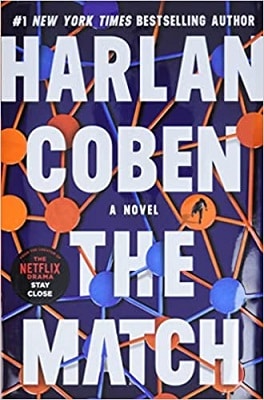 If you’ve already read and enjoy Harlan Coben novels, you’ll probably find that The Match hits all the high points––complicated stories that reveal dangerous lies and buried secrets that suddenly present risks of death and disaster as our hero probes for the truth.

You’ll be intrigued as you follow the mysterious plot twists and the fascinating characters protecting secrets and uncovering answers.

However, if this is your introduction to Harlan Coben novels, I suggest that you start with another choice from his long list of bestsellers. I found myself constantly distracted by the gradual unveiling of the complicated backstories and wishing there had been a warning note like in a Netflix series based on one of his novels––This is episode number five. You may wish to start at the beginning.

The Match is a story of Wilde, (appropriately named after he was found as a five-year old alone in the woods unaware of who he was or how he got there). He is trying thirty years later to track down his family through a DNA match. Unfortunately, the matches reveal more family issues than anyone expected and a killer is unleashed on a rampage of revenge. Eventually we catch up with enough of the backstories to understand all the character connections with Wilde and follow a few digressions into their romantic interests while we also get some revealing insights into reality TV, police tactics, and the science of DNA matching. Coben even takes us inside the mind of the killer without revealing too much.

By the end of the novel most of the disturbing questions are answered, but there remain a few unexplained mysteries and some unfinished stories. I expect there will be future episodes of Wilde, the Boy from the Woods, with his supporting cast of friends and family.

The Match available at:
Amazon