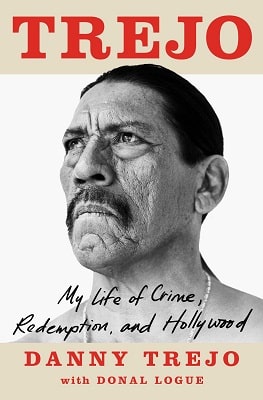 Trejo is the memoir of actor Danny Trejo as written by Trejo and fellow actor Donal Logue. The memoir details Trejo’s life, warts and all, with him not shying away from warts one bit.

For those most familiar with Trejo through his acting, the contents of the book will likely also change one’s view of Trejo and inform the reader of aspects of Trejo’s life not as well known as his portrayal of acting heavies.

Through the years, Danny Trejo has been quite open with his history and has not hidden his early life of criminality and time spent in numerous prisons. What many may not know of are his many good works after his own personal epiphanies led him to a more purposeful life, especially when providing help to those down on their luck and battling all sorts of life’s hardships, especially substance abuse issues. And it appears at seventy-seven years age, Trejo is not slowing down.

Throughout his life, Trejo illustrates lessons he has learned from the people in his life, regardless if they were murderers, gang members, prison inmates, fellow actors, clergy, or regular people. Trejo makes it clear, lessons are to be learned from almost any person so long as a person is open to discover those teachings.

In the memoir, Trejo comes across as humble, down to earth and thankful for his life and the opportunities that the entertainment industry has provided him, especially in allowing him to help others.

From meeting American presidents to being revered not only in Mexico but throughout the world, Trejo has used his opportunities to help countless others struggling just as he once did with substance abuse.

Being the prolific performer he has been for many years, in a career that started out largely by accident and through his boxing skills, when queried why he appears in so many “bad” movies, Trejo graciously points out each time he is paid for acting it puts food on his family’s table and shelters them, while providing many others with jobs, and further allowing him to do his outreach to those in need.

Trejo also recounts his Hollywood career with plenty of tales of his past, but not in a gossip-shovel-the-dirt method meant to elevate his own standing while humiliating those he has encountered through the years.

Trejo is a highly recommended memoir filled with surprising revelations, revealing a much more complex human than the actor known for portraying villains on the screen.