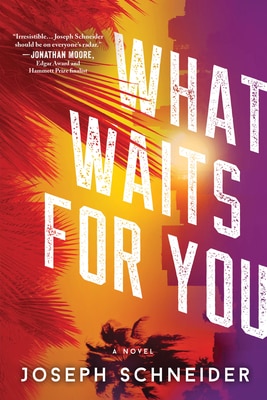 What Waits for You

What Waits for You by Joseph Schneider is a different take on a contemporary police procedural set in the Los Angeles, California area and is the second book in the series. Rookie Detective Tully Jarsdel and his partner, Detective Oscar Morales work murder cases as part of a new homicide squad. The first sentence of the prologue pulls you into the story immediately.

Tully and Oscar catch a case where the mutilated bodies of an elderly couple and some unknown DNA are the only clues. But when this becomes the first of several murders, and the killer is known as the Eastside Creeper, panic sets in for the residents of LA.

The novel is much more than a police procedural. Tully brings a unique perspective to his job. He is an ex-college history professor that was working on his PhD when he decided to change careers. It’s about loneliness even when surrounded by others. It’s about not fitting in with your colleagues even though you went through the same training regimen. It’s about deciding to change careers and dealing with parents who feel you made a mistake.

Tully is a compelling character that you can root for, but definitely has flaws as well as virtues. His internal and external conflicts and struggles were well defined. Oscar plays a much smaller role in this book. While there were secondary characters that were vital to this story, I felt the lack of discussions and interactions between Tully and Oscar reduced one of the key elements that made book one of the series so enjoyable.

The plot in this story was more complex that one might initially think. It had a twist that added to that complexity. The author did a great job of world-building.  Discussions of movies, physics, office politics, and crime prevention added additional elements to the book. However, the pacing felt too slow at times; especially after a prologue that was outstanding. The pace did pick back up in the last quarter of the book and rose to a dramatic conclusion. Readers should be aware that the crime scenes are gory and described in detail.

Overall, this was unique and fresh.  I enjoyed this novel and recommend it to those that enjoy police procedurals with a twist and an unusual protagonist. To better understand Tully’s background, this series should be read in order. This is an excellent novel, and I look forward to reading Schneider’s next one.

I received a complimentary physical ARC from Shauneice Robinson and Poisoned Pen Press / Sourcebooks. Opinions expressed in this review are completely my own and are not biased in any way.