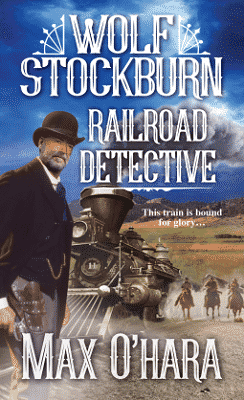 Wolf Stockburn, Railroad Detective by Max O’Hara is shocking, unnerving, and suspenseful. It weaves aspects of suspense action and crime action thrillers inside a western and is the first book in a new series. The novel is set in the Dakota Territory prior to North Dakota’s statehood.

Wolf Stockburn is a detective for the Northern Pacific Railroad, but he isn’t just any detective. He’s known as the Grey Wolf and is respected and feared, depending on which side of the law one is on. He is extraordinary in that he started as a Pony Express rider in Native American territory and learned how to shoot from a gunfighter. He also seems to have a sixth sense when trouble is near. In this case, a large group of bandits are attacking the Northern Pacific Railway. They use dynamite to damage the tracks and open the express cars carrying high-value freight, and then rob and then kill the passengers and crew. Wolf has been sent to find who the bandits are and where they are hiding out.

There is a lot of character development in this book for Wolf as well as a couple of the secondary characters. I got a sense that he doesn’t take much downtime and doesn’t think about the future very much. How will he change over the course of the series?

The action starts out strong. Then suspense is built during a slower part of the story line, but it was so full of energy that it kept me turning to pages to find out what was going to happen next. I was fully invested in Wolf’s investigation.

The author brought a strong sense of place to the events in the book. I could easily visualize the towns, the people, and the landscape. The action somehow managed to seem plausible for the times even though it was definitely extreme. Additionally, many questions came to my mind. What pushes people to do the things they do? Why murder so many people when they have already given you their valuables? What are people willing to do to get revenge for past actions or inactions?

Overall, this book was an action-filled crime thriller in a western setting with some work and family drama that doesn’t detract from the story, but adds depth. This is the first book that I have read by Max O’Hara but it won’t be the last. I highly recommend this novel to those that like western crime thrillers.

Kensington Books – Pinnacle and Max O’Hara provided a complimentary digital ARC of this novel via NetGalley. This is my honest review. Opinions are mine alone and are not biased in any way. Publication date is currently set for March 30, 2021.