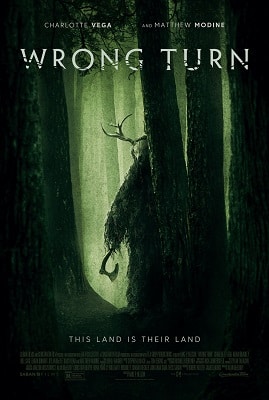 Wrong Turn (2021) is a reboot of the Wrong Turn franchise which began in 2003 and had two sequels, and three prequels. The original series focused on what can be a called a family of inbred cannibals who lived on a mountain range and hunted and ate anyone who entered their territory. But the reboot changes the antagonist to a group of people known as The Foundation. Separated from the US, The Foundation began their own colony in the Appalachian mountain range.

Wrong Turn received mixed reviews from critics, who felt that the film was better than those who came before in the series, but lacked cohesive writing, and struggled to develop the characters. I can understand the point of view of critics here, but I felt that this reboot was nowhere near good enough and doesn’t hold a candle to the original franchise. There is nothing keeping the films aligned apart from the name and the idea of people taking a wrong turn. This film would have performed better if it didn’t have a namesake. That is not to say the film doesn’t have some redeeming elements, but rather, Wrong Turn was so different from what I expected, to claim it is a reboot feels like a disservice to the original franchise.

But what was done well in this film? The visuals are where this film places all its eggs. We all remember the original films for the outstanding death visuals: between beheadings, split bodies, or razor-sharp traps. But this film, takes a change in focus, by having The Foundation be established back prior to the civil war, we spend time with a group of people relatively untouched by modern society. They are self-sufficient, have their own language, own laws. And when they go out hunting and checking their traps, they wear the skulls of animals to both blend in and scare off hunters. We have ram, boar, deer, and wolf skulls all used by the main antagonists; and they are likely to live in memory due to the way in which the leader refers to them and overall role that they play in their society.

Through the creation of another group, we can see what life may have been like for those who lived before electricity, and how the cohesion between the group is what really allowed society to thrive rather than hoarding resources.

But that is not to gloss over the fact that they are brutal. Instead of killing those who have crossed their path, they singe out their eyeballs and throw them into a pit, sentencing them to a life of blindness until they decay and die of old age. (They are given small amounts of food to survive). When I reflect on Wrong Turn, I can’t help but think maybe they should have shortened their international title, Wrong Turn: The Foundation, and just sold the film to audiences as The Foundation.