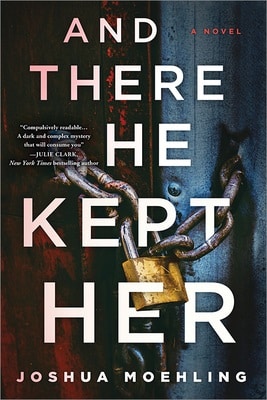 And There He Kept Her

And There He Kept Her is a well-crafted, debut thriller by author Joshua Moehling. I was struck by the originality of the story as I started reading – one that puts readers in the head of the villain with his identity revealed from the beginning.

This isn’t just another dark, gritty, graphic suspense thriller. Readers are summoned to ride shotgun from beginning to end, meaning they are privy to all the dirty deeds, secrets and intentions of everyone involved. So what’s left? A chilling, complex plot line that tackles issues like mental illness, teen drug use, sexual abuse and orientation, and kidnapping – all rolled up into a disturbing, shocking thriller.

This story unfolds through the police investigation of acting Sheriff Ben Packer who has returned to his ancestral roots after the murder of his partner. Many residents of the small town of Sandy Lake, Minn., don’t remember the boy who left, but small town gossip runs rampant so keeping his private life private is out of the question. He figures they’ll accept him and his sexual orientation or they won’t. Either way, he’s back with no plans of leaving. When Ben’s cousin’s daughter Jenny is identified as one of two missing teenagers, Ben promises his cousin he’ll find her. What he can’t promise is if she’ll be alive or dead.

Jesse takes girlfriend Jenny along for the ride when he breaks into old man Emmet Burr’s basement with the goal of stealing prescription drugs. He’s been assured that the broken down, morbidly obese, elderly man will be out like a light for the night. A bomb wouldn’t wake him. However, when Jenny joins Jesse in the basement just before the upstairs basement door swings open, it’s old man Emmett staring down the barrel of a gun with the intruders in his sights. Definitely, a change in plans. Readers follow events through the dual points of view of Emmett and Sheriff Packard. Emmett has decades old secrets buried in the basement that he’ll do anything to keep hidden. All he wants is to be left alone, and yet through no doing of his own, he’s forced to deal with these kids. Again, the fact that as readers we are aware of everything happening turns this thriller into an atypical police procedural of sorts as Sheriff Packard works the case. An evil, intense atmospheric vibe sets a frantic pace as authorities deal with the lack of clues in a race against time to find the teenagers before it’s too late. During this time, as readers spend more time with Burr, the line between good and evil gets a bit blurry. Is he a villain? Victim? Abuser? Protector? Readers will be charged with considering his many deeds, combing through the evidence and rendering a verdict themselves.

And There He Kept Her is a chilling, creepy thriller with ominous vibes. The author does an outstanding job of muddying the line between villain and victim in an attempt to build empathy for Emmett. The character development in this story is excellent as the story proceeds and more background information surfaces. Moehling handles social issues such as teen drug, sexual and senior abuse with the respect and attention they deserve. And There He Kept Her is a dark, dark read and an exceptional debut novel. I believe the author has potentially laid the groundwork for a series featuring Sheriff Ben Packard. I, for one, would love to see where his story goes. Highly recommended to fans of suspense thrillers.

And There He Kept Her available at:
Amazon