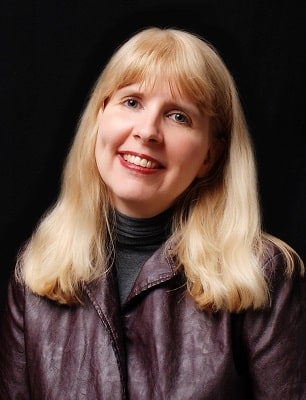 Q. You’ve said elsewhere that you loved studying all the ways a brain can go wrong. What are some of the most interesting that you’ve used in your writing?

Joanna: It hasn’t made it into my novels yet, but I have used Capgras Syndrome in previous fiction. Capgras Syndrome is also sometimes known as “Imposter Syndrome” because the afflicted become convinced that their loved ones are imposters. The delusion is brought on by a brain injury, typically either through trauma or stroke. Afterward, the patient will recognize their spouse, their kids, their parents, etc., but they believe their loved ones have been taken over by an outside force—that they are “pod people.” The best medical guess is that Capgras Syndrome occurs when the parts of the brain devoted to vision become disconnected from the parts responsible for emotion. So, the patient can see their loved one (they aren’t blind) but they don’t have an emotional response to the person. Absent this emotional response, patients believe their family members are imposters. I read one case where the patient even thought his dog was an imposter. Another believed her apartment had been switched.

Occasionally, people suffering from Capgras Syndrome have become violent with those they believe are “imposters.” Most people recover over time as the connections between the various brain areas repair themselves.

Q. Your books explore the themes of forgiveness and redemption. What are some other themes that interest you? What about themes you haven’t pursued but would like to?

Joanna: A major theme that runs through my work is the nature of justice. What constitutes justice and who gets to decide? The official justice system is applied unevenly depending on the race and class of the people involved. Also, sometimes statutes of limitations put a criminal beyond legal grasp. The Golden State Killer, Joseph DeAngelo, was recently sentenced to life in prison for the 13 murders he committed, and around a dozen rapes were attached to the sentence as well. However, he’s alleged to have committed dozens more sexual assaults and robberies. The plea deal means the surviving victims are spared a long trial; it also means there is no public airing of the wrongs against them. Whether this is better or worse, and how survivors manage to go forward in the absence of perfect justice, is interesting to me.

I’m also interested in the line between fame and infamy. What does fame bring you, for good or ill? What happens if it gets taken away? Public and private personas are different, sometimes shockingly so.

Finally, the Ellery series is primarily about identity. Ellery and her FBI rescuer, Reed Markham, each had their public identities forged by a famous serial killer. The relentless hunger for him means that he’s all anyone cares to know about them. Ann Rule, the true crime writer who was also an acquaintance of Ted Bundy, recounts being prepped for surgery and having a nurse lean over her on the gurney to ask, “What was Ted really like?” So it goes for Reed and Ellery. They each have to figure out who they are apart from this infamous story.

Q. What draws you to serial killers? Why do we love to read about them so much?

Joanna: The ongoing popularity of serial killers, especially in the USA, is one reason I think they’re fascinating. Ted Bundy has been dead since 1989 and there is at least one new book, TV show or movie about him nearly every year. Why? Does our hunger to put these guys in the spotlight inadvertently make more of them? Based on some of their comments, it seems possible.

Part of the reason why serial killers make good fiction is that the stakes are immediately high; the killer will keep going until caught and anyone could be a victim. Furthermore, a serial killer is by definition someone who has eluded capture for multiple murders. This makes them a formidable foe. Finally, I think one reason that serial killers drive keen interest in real life and in fiction is the desire to understand them. Their actions are transgressive and horrifying. Why do they do these things and how could we stop them in the future? Answers are few at the moment, which means that, even apart from their crimes, the very nature of the serial killer is a mystery.

Q. You’re well known for the research you do into the psychology of your killers, arsonists, and all-around bad guys. What psychological exploration did you do for your Every Waking Hour?

Joanna: Every Waking Hour is about the corrosive nature of family secrets and how a family’s efforts to protect their children can sometimes backfire. It’s also about how a wrong that is never righted continues to wreak havoc over generations. The flip side is that families who value open communication and apologize for missteps act as buffers against the cruelties of the outside world. In short: family can warp you and it can heal you, depending on the specifics.

As for the underlying crimes, it’s interesting to me how many cold cases are solved when people close to the perpetrator decide to come forward after years of silence. The weight of hiding the misdeed all those years begins to weigh on them. Every family has secrets. Some of them happen to involve a murder.

Joanna: My next book is Gone For Good, due out August 2021. It’s about a serial killer who has potentially surfaced after twenty years of silence. A rookie female detective in Chicago has to figure out if his latest victim, an amateur sleuth, somehow forced the killer out of hiding.

The former LAPD recruit on UNDER THE COLOR OF LAW