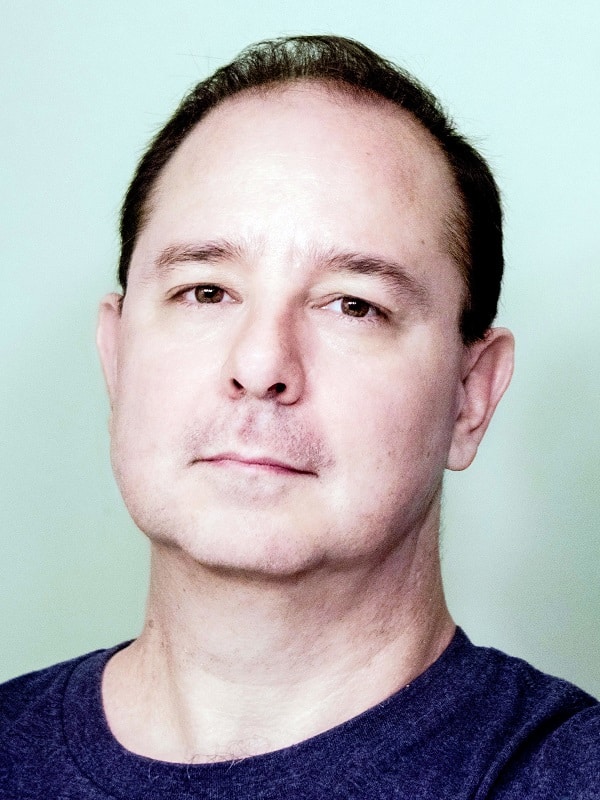 John Scalzi is best known for his Old Man’s War series, three novels of which have been nominated for the Hugo Award, and for his blog Whatever, where he has written on a number of topics since 1998. He won the Hugo Award for Best Fan Writer in 2008 based predominantly on that blog, which he has also used for several charity drives. His novel Redshirts won the 2013 Hugo Award for Best Novel. He has written non-fiction books and columns on diverse topics such as finance, video games, films, astronomy, writing and politics, and served as a creative consultant for the TV series Stargate Universe.

Q. Jamie Gray, the protagonist of The Kaiju Preservation Society, is your second ambiguously gendered protagonist – this time without the benefit of a gender neutral threep to present themselves to the world through. Was there anything you found particularly challenging about writing Jamie, or that particularly appealed to you about not defining that aspect of the character?

John: I didn’t find it particularly challenging to write Jamie without reference to gender, no; writing in the first person makes it easier to do, and beyond that it’s relatively simple in English to get around gender signifiers in a way that doesn’t call attention to itself. For the story I was telling I didn’t find identifying Jamie’s gender particularly relevant, so I didn’t. Generally speaking I go light on descriptions of characters unless it’s directly relevant to the plot; that’s across all my books, not just this one. This annoys some people and delights some others.

Q. Can we expect the audiobook to follow in the footsteps of Lock In and Head On and give listeners the choice between two narrators?

John: That’s up to Audible, and as of this interview we haven’t announced any narrator(s). That said, having two narrators bumps up the cost of the production, so if it turns out that there’s only one narrator, people shouldn’t see it as indicative of gender, merely representative of expenses.

Q. You mentioned in your author’s note for The Kaiju Preservation Society that writing this book was restorative; as a reader, so was reading it – I think we all need an escape after the last couple of years! If you had the opportunity to take a tour with the society, would you do so?

John: In theory, yes! As a practical matter, there are, alas, issues to consider, like whether I can take so much time out of my schedule, whether it’s fair to my family to just disappear for months at time, and what obligations that I have back in the real world. There’s an actual real world analogue for this: I would love to spend a tour at McMurdo Station in Antarctica; I mean, how awesome would that be? But I’m not sure how I could arrange all of the rest of my life to manage it. Also, I would miss my wife and kid terribly.

Q. You also mentioned the plot and concept for The Kaiju Preservation Society dropping fully-formed into your mind after putting aside another novel you’d been working on. Did you find this impacted your normal writing or research process? Is it something you hope to do again?

John: It didn’t impact my normal processes because my normal processes had already blown up by the time — the novel I was writing failed to launch, and honestly, I was kind of screwed. I was both surprised and grateful when Kaiju dropped into my head; it meant that I could actually deliver a novel in a timeframe close to when I was originally meant to. And while I’m grateful my brain provided me with a viable “Plan B”, it’s definitely not something I would want to do again. It’s very stressful to not be able to write a novel for months at a time and have to admit defeat. I’d rather just do things normally.

Q. Should you have the opportunity to nominate yourself for induction into an Ancient and Sacred Order – what would the Order be?

Q. There’s one particularly memorable scene involving two kaiju, Twilight, and a three-word phrase that really conjures an image. Is that the kind of thing that has to be cleared by lawyers, and was it written just to get a lawyer to say it?

John: I can promise I was not thinking of lawyers pretty much at any time during the writing of this book. I do rely on my editor Patrick to let me know if I’ve waded too far into the attribution waters — he’s been an editor for decades, he knows what’s too far, and if he’s not sure, then he can ask the lawyers. But in my own experience there’s nothing there that’s actionable, or even derogatory of Twilight. Please don’t hunt me, Twilight fans.

Q. You’re a pretty busy guy – between writing, music, a very active social media presence, and now a church renovation. What drives that motivation, and is there anything you’re not currently doing that you’re trying to make room for?

John: I mean, some of it is just that I’m easily bored so I like to keep myself amused. Some of it is that all work and no play makes Jack a dull boy. And some of it is career maintenance and planning — we do have actual plans for that church, for example, that are part of long-term goals. I’m doing enough that I don’t really want to add anything new, I just want to have more time to work on and enjoy the things I’ve already assigned to myself. We’ll see how that goes.

When COVID-19 sweeps through New York City, Jamie Gray is stuck as a dead-end driver for food delivery apps. That is, until Jamie makes a delivery to an old acquaintance, Tom, who works at what he calls “an animal rights organization.” Tom’s team needs a last-minute grunt to handle things on their next field visit. Jamie, eager to do anything, immediately signs on.

What Tom doesn’t tell Jamie is that the animals his team cares for are not here on Earth. Not our Earth, at at least. In an alternate dimension, massive dinosaur-like creatures named Kaiju roam a warm and human-free world. They’re the universe’s largest and most dangerous panda and they’re in trouble.

It’s not just the Kaiju Preservation Society that’s found its way to the alternate world. Others have, too–and their carelessness could cause millions back on our Earth to die.