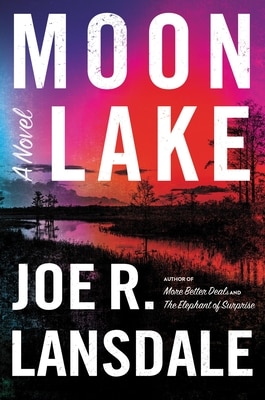 Moon Lake by Joe R. Lansdale opens during a night in 1968 East Texas with a disturbed father and his thirteen-year-old son in a car on a bridge over Moon Lake. With ramblings not understood by the boy, his father then drives their car off the bridge and into the depths of Moon Lake.

Through an almost miracle, the boy, Danny Russell, is able to escape from the vehicle and is pulled ashore by what he first mistakes to be a beautiful mermaid, soon learning it is instead a young black girl named Veronica Candles that happened to be fishing on Moon Lake with her father.

When divers can’t locate Danny’s father or car and because Danny’s mother had previously abandoned the two and no other family is available for the care of Danny, the Candles, a kindly Black family, offers to take him in until a more permanent solution can be found.

Danny is then sheltered in a family with the care he had never felt before. Mr. Candles mentors Danny, teaching him about life, boxing, being a good person, and the history of Long Lincoln of old and new, and how the original Long Lincoln was flooded for the creation of a hopefully more economically prosperous New Long Lincoln. Eventually, a jet-setting aunt to Danny returns from her globe-trotting and agrees to continue his upbringing. Danny, in his preference of staying with the Candles ignored, learns one of his first lessons when it comes to race in rural Texas and the troubling meanings of societal demands of remaining with one’s own.

The novel then jumps forward ten years when a severe drought has caused Moon Lake to dry up, revealing the car and body of Danny’s father, the flooded town of Old Lincoln, and deep dark secrets better left underwater.

Soon, Danny is pulled into the sordid underbelly of both Long Lincoln’s which includes running afoul of a network of powerful and deadly people, led by three community elders willing to do anything to protect their interest and in ways that show too often those appearing normal are oftentimes the deadliest of villains.

Moon Lake is a good summertime read with likable characters and an interesting story with a mixture of realistic social commentary and an adventurous and escapist main plot.