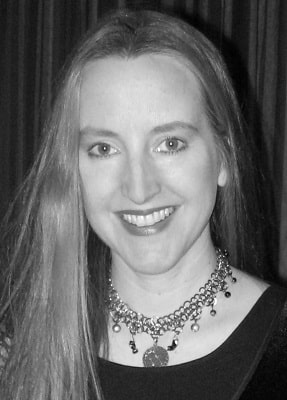 Alice Henderson’s love of the wilderness brought her into the career of wildlife researcher. It’s also the impetus for her new thriller series which starts with A Solitude of Wolverines.Other writing credits include media-tie in novels, including official novels for the TV shows Supernatural and  Buffy the Vampire Slayer.

Q. Your debut thriller, A Solitude of Wolverines is a story of conspiracy, murder, and wilderness survival. How did your own background as a wildlife researcher inform the book? And when did you have the very first inkling of this story?

Alice: I was on a wildlife sanctuary in rural Montana, setting up recorders in the field. One of my specialties is bioacoustics, wherein I record an environment and later examine the data to determine what species are present in an area. That day I’d set up recorders in the hopes of capturing wolf howls and remote cameras in the hopes of snapping images of wolverines. It was a very remote location, isolated and wild, with no cell reception or nearby towns, surrounded completely by nature. I realized what a fantastic setting it would be for a thriller.

For years I’ve done work with wildlife and feel very passionately about helping endangered species. At that moment, I realized I could bring my love of wildlife to my love of writing, and I hoped to create a suspenseful novel that would not only entertain readers, but inform them of the plight of specific species.

So I created my protagonist, Dr. Alex Carter, a wildlife biologist who would be resourceful and could think and fight her way out of dangerous situations. I wanted each book in the series to be about a different species. Because few people are familiar with wolverines and their precarious situation, I wanted the first book to feature them, to help bring attention to their imperiled status. Though wolverines once enjoyed vast territories throughout many states, due to climate change, overtrapping, habitat fragmentation and other factors, they now survive in isolated pockets of the Rockies and Cascades and number less than 300 in the contiguous U.S.

Q. Have you ever been in a close call in the wilderness?

Alice: Yes. One of the most thrilling experiences of my life was a close encounter with a grizzly bear in Montana. I was hiking along an alpine lake in late summer, enjoying the remaining wildflowers and berry bushes growing near the bank. Suddenly I smelled the stench of rotten meat and came to a halt. I looked up to see a grizzly bear just a few feet away, standing on his hind legs and stripping berries off the bushes straight into his mouth.

He looked at me. I looked at him. He took two steps out onto the trail, still on his hind legs. He was just a couple feet away. I turned to the side to look smaller and averted my eyes so he’d know I wasn’t a threat. He bent his massive head down and sniffed me from my head to my navel.

I saw then that he had rotten meat matted into the fur of his belly, and I was gazing straight across at his massive front paws and long claws.

Then he dropped down to all fours and just meandered away. The whole time I was never afraid. I didn’t feel any kind of threat from the bear, just pure curiosity. I was thrilled and ecstatic, and as he strolled away, I just felt pure elation. It was an amazing experience.

Q. You used to work at LucasArts where you wrote on a number of properties. Can you add some details we may have never heard about?

Alice: When I got the job at LucasArts, I was over the moon. I’d long been a fan of Star Wars and Indiana Jones, and the chance to contribute to these universes was exciting. It was an interesting mix of creative folks there—artists, writers, designers, coders. There were neat opportunities like eating lunch at Skywalker Ranch, going to private screenings of movies, and attending incredible Halloween and Christmas parties. One of my favorite things was a display case in the main house at Skywalker Ranch. It held items like Indiana Jones’s fedora and whip, Cherlindrea’s wand from Willow, and Howard the Duck’s guitar.

Q. You’ve been on panels that discussed scientific accuracy in fiction. Overall, what are some big scientific inaccuracies readers should be aware of?

Alice: Inaccurate science in novels can really turn off readers. Depending on the extent of their knowledge about certain subjects, this disenchantment can be enough to make them stop reading. If writers use a branch of science in their fiction, I believe it’s important to get it right. It’s an interesting line to walk, because as writers we can make up all kinds of fanciful plots, but if you make a mistake about things people know in real life, it can be off-putting. And this can happen not just with science, but with all kinds of subjects, like history.

If you’re reading a book, for example, and you state that the oldest hominid fossils were found in South America, readers familiar with anthropology will be taken right out of the narrative.

I had the real pleasure of being selected to attend Launchpad, a writing workshop that was funded at the time by NASA. It was aimed at bringing accurate science to fiction. We addressed aspects that a lot of movies and books get wrong, for example what really happens when you’re sucked out of an airlock. (You won’t freeze or explode, but you should expel all the breath in your lungs, squeeze your eyes shut, and hope that someone swings by to pick you up in the moments of useful consciousness you have left. And if they do rescue you, get ready to look like you were just infected with a zombie virus – some of the blood vessels in your eyes and nose will have burst.)

Over the years, I’ve seen a lot of inaccurate science in fiction, including things like 350-million-year-old ice being cored and studied by glaciologists (the oldest ice on earth is around 2 million years old). Or dinosaurs that lived millions of years apart fighting each other. Or inaccurate depictions of carbon dating. As for any heuristics to spot this stuff—I’d say it depends on how familiar you already are with the subject. You’ll know those mistakes when you see them, and if it’s not a subject you’re overly familiar with, you may just read on without spotting the error. The latter is what the NASA workshop sought to avoid —  accidentally spreading scientific misinformation through fiction.

Alice: The second Alex Carter novel is complete and off to my editor. In it, Alex Carter travels to the Canadian Arctic to study the Western Hudson Bay polar bear population, which is threatened by climate change. But once there, she encounters other dangers out on the ice, and must fight to keep her study and herself alive.

Right now I’m gathering ideas for a third book in the series, deciding which species I want to address next. I can’t wait to delve back into Alex Carter’s world and hopefully inspire readers to learn about another species that needs our help!