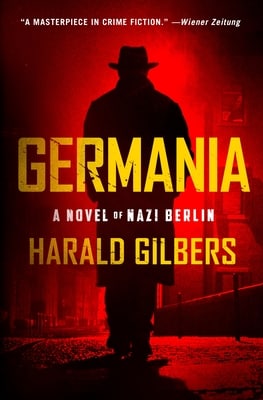 ,Rejoice fans of Philip Kerr and Alan Furst, a new voice has reached our shores. Germania was published in Germany in 2013 to great acclaim, and garnered the prestigious Glauser Prize for Best Debut Crime novel. Finally, an excellent English translation is available for our reading pleasure.

A cinematic noir thriller is woven through the bombed-out streets of war-torn Berlin in the waning years of 1944 Nazi Germany. SS Hauptsturmfuhrer Vogler has unsuccessfully chased a serial killer for three months. In desperation, he enlists—or rather coerces—Richard Oppenheimer to act as an advisor in his unsuccessful endeavor. Oppenheimer was one of the best investigators in the crime squad before he was removed from public service, because of his odious crime of being “a Jew.” He had successfully investigated and brought to justice three of the most heinous serial killers in German history: Friedrich “Fritz” Haarmann the “Butcher of Hannover,” Peter Kurten the Vampire of Dusseldorf, and Karl Grossman the killer of prostitutes and homeless women. It was Oppenheimer’s involvement in this last one—the killer, monster, madman investigation—that brought his name to the attention of Vogler.

Oppenheimer has no choice and certainly cannot not turn down Vogler’s request. He’s already living in the “Jew House” with his Aryan wife, and slinks around the streets marked by a yellow star, avoiding eye contact with passersby. By joining the case, Oppenheimer hopes to avoid his “evacuation,” an official term used by the National Socialists and euphemism for being shipped off to a concentration camp.

Inspector Oppenheimer quickly, reflexively, takes on the familiar role of hunter. At the multiple murder sites he finds a young women, strangled and displayed in a somewhat sacrificial manner on top of a World War I memorial with her legs splayed open, revealing a horrendous mutilation of her genitals. With further exploration the victims have had long steel nails driven into both ear canals, which were embedded into the brain.

Gilbers weaves together a complex and convoluted narrative that culminates in multiple unexpected reveals. His cinematic and atmospheric tale obviously pays homage to the great noir films of Fritz Lang. Like any good historical novel, this story is populated by the main players of the time: Hitler, Goebbels, Speer, and Goring, though they are only present tangentially. The main focus are the protagonists of Oppenheimer, Vogler, and the murderer. And, lastly perhaps, the German people.

The bottom line: An excellent translation to a deeply engaging historical noir. All the markings of a classic.

Thanks to NetGalley and Thomas Dunne Books / St. Martin’s Press for supplying an Uncorrected Proof in exchange for an honest review. This tale measures right up there with the best of Philip Kerr’s beloved “Bernie Gunther” series. I look forward to English translations of Gillber’s four other “Oppenheimer” novels.