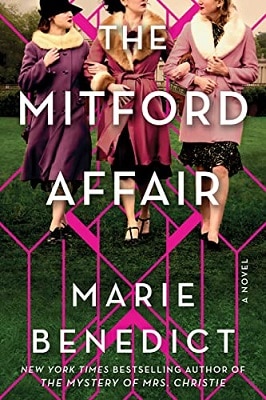 The Mitford Affair reimagines the lives of the Mitford sisters who dominated the English political and social scenes between the World Wars. The family starts struggling to keep up the good image when one marries a fascist leader and another is rumored to be Hitler’s mistress.

Due to the worldwide economic crisis, the family loses the money that would give the six sisters some cushion. Now, they have to find their own way in the world.

The story is driven mainly by three sisters. Nancy is a novelist who tries to mend the bridge with Diana and Unity who fall out of grace with the family. Diana makes a scandal with her divorce to a Guinness tycoon, whom she leaves for a leader of the British Union of Fascists. Diana, with her sister Unity, shares the same vision of joining the BUF. They see it as the bright future for Britain with so many unemployed people. Diana is ambitious in her dreams of building up the BUF to becoming the prominent governing political body in Great Britain; and uniting Great Britain with Germany in this common political cause.

Unity is an ardent Nazi and obsessed with Hitler. She moves to Munich to study the German language and its culture. After cozying up to Hitler, she receives a flat that is procured by the Nazis from a Jewish family who most likely is sent to a concentration camp.

There is a believable presentation of how people are lured into believing Hitler’s ideology. And the decision Unity makes after Hitler invades Poland begs a question – was she fooled as many others?

Decca is a drastic contrast. She chooses to serve in the press corps in the Spanish Civil War. She stands with the people who are being oppressed and violently attacked by the fascists only because they have communist inclinations.

The story of the Mitford sisters weaves two clashing ideologies of fascism and communism, which further create fractions within the family. Not only that the personal interests and fears drive some of their decisions. There is one who is not afraid to point to the hypocrisy within the family, and stands for what she believes is right, but the others strongly believe in their good cause, too.

It is a fascinating and sad example of family who falls into the dismay because of politics. It is an example that is relevant to present time.

As with previous books by Marie Benedict, this story is character-driven and told with crisp prose. It is intriguing and engaging. It involves a view of two sides and a subject that brings a conversation to the table.

The Mitford Affair available at:
Amazon