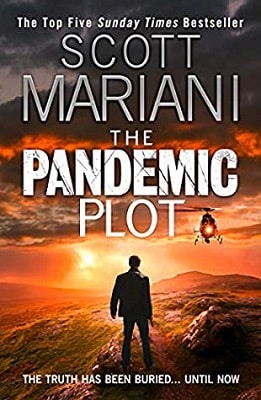 When first I discovered the work of Scott Mariani, I could not get enough of the action and great plots of his novels. Now, with the 23rd novel in his Ben Hope series, I still feel the same excitement, something that is rare when things have gone on this long. Hope finds himself in another mess, as his son has been arrested for a murder in England.

Hope travels from France, in hopes of untangling the web, only to have the young man land in prison and await trial. Hope traces the murder back to an investigation the victim had been undertaking, which leads to a mysterious journal. Within the pages of this book lies the cornerstone of a secret that could change the face of history. While Hope is baffled by what he discovers, it is more important to find the killer and clear his son’s name once and for all. Mariani pens another winner that had me riveted throughout.

Ben Hope may be former SAS, but even he likes the idea of some downtime on his property in rural France. All that is shattered when he gets a call from his son, Jude, who has just been arrested for the murder of a man staying at the family estate in England. Hope rushes to help, only to find a cocky Jude unwilling to abide by the legal rules. Jude is tossed into jail ahead of his trial, as Hope tries to get to the root of what happened.

Hope soon learns that the victim is a Canadian investigator who’s been hired to look into some family events. At the centre of it all is a journal from almost a century before. As Hope tries to peel back the layers, others who are involved in the investigation turn up dead, leading him to believe that there is cover-up taking place. As he tries to get a handle on what’s taking place, Hope connects with a police detective who is not quite convinced that Jude is guilty either. Together, they try to pry open some doors and figure out what could be fuelling this murder spree.

As Hope reads the journal in question, he learns of a young woman’s path into the criminal world. These petty crimes culminate in the theft of a rare book, which proves to be more than simply a piece of literature. Between scouring the pages of the journal, Hope connects with a man who has much to share about the pharmaceutical world, admissions that could pave the way for ruthless criminals to get their hands on debilitating weapons. These two storylines connect, albeit loosely, to open the door to questions about the 1918 Spanish Flu pandemic and what one company might have known all those years ago.

While Hope tries to help exonerate Jude, the young man finds himself making both friends and enemies behind bars. An act of bravery earns Jude the thanks of a ruthless gang leader, who organises a prison escape. Now, with Jude on the lam, Hope must worry about his son and a killer who is sure to strike again soon. It will take everything Hope has to keep everyone safe, while ensuring he lives long enough to present the truth to the authorities.

While there are some authors who write long series and tend to run out of ideas, Scott Mariani seems to be on point deep into his Ben Hope thrillers. The stories are poignant to the day and the action is never diluted. I have found few series that can say as ‘fresh’ after so many adventures, but Ben Hope seems always to find new ways to entertain readers with his antics. I enjoy whenever I hear of a new novel by Mariani, particularly when Ben Hope is in the middle of yet another adventure.

Ben Hope has lost none of the lustre of the early novels in this series. Passionate about those who matter to him, Hope always finds a way to help them while thrusting himself into the middle of a troublesome situation. The reader usually sees him traversing the globe to find answers, but this novel keeps our protagonist within the confines of England for the most part, using his brains and brawn in equal measure. Hope is fuelled by trying to help his son, a connection that is still fairly fresh for him, as series fans will know well. I can only hope to see more of the softer side of Hope in the coming novels, though his love for the few family members he has shines through this novel.

Mariani offers up a strong cast of supporting characters, both those in a returning role and new faces to keep the story flowing. The reader is able to see things in a new light, particularly in the flashback sequences and those characters who carry the story along in the 1920s and 30s. There is a nice balance of ‘good’ and ‘bad’ individuals to keep the plot moving along, something that permits the reader to contrast and compare with ease.

The story was a well-balanced piece of work, something that I enjoy so deep into the series. The narrative flowed well, developing the plot effectively in the two timelines. A mix of chapter lengths allow the reader to get ensconced in all the sub-plots before being thrust into action and cliff-hangers as well. All of this permits for a thoroughly enjoyable read. As Mariani is apt to do, there is a spin on history that forces the reader to open their mind, as they wonder how much could actually be truth as opposed to fictional supposition to add spice to the story. Many will ask, can the book be read as a standalone? While I suppose it could, I will repeat what I often do when asked this question. Why would you want to miss out on the nuances that pile up throughout the series and culminate here? Series fans will surely love this one, as it is another winner. Those who are new to Scott Mariani had best decide how much of a ride they want. I’d highly recommend getting their proverbial feet wet at the beginning, as it is an excellent series worth the investment.

Kudos, Mr. Mariani, for another winner. I cannot wait to see what Ben Hope has coming up in the future!