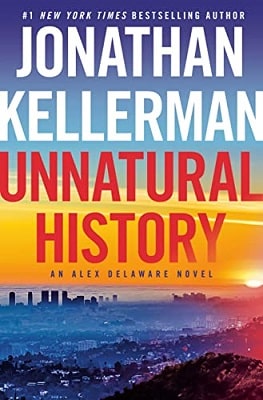 There isn’t a book in the entire Alex Delaware series (38!) that I haven’t devoured as soon as it has come out. Except for a few, Los Angeles is always the main character and I am always glued to the very last page. Unnatural History is no exception, focusing on the juxtaposition of the very wealthy in LA and the very downtrodden homeless, and what could happen when those pieces clash. As part of Kellerman’s formula, the same characters appear in most books including Dr. Alex Delaware, a child psychologist, his best friend Milo Sturgis, a gay Los Angeles detective who uses Dr. Delaware’s expertise in psychology to consult on cases, Robin, Alex’s long-time girlfriend and their French bulldog Blanche, and of course, Los Angeles, the main character of all books in the series.

Donny Klement, the youngest son of the eccentric billionaire, a novice photographer is shot to death in his home/studio in the middle of the night. Discovered by his assistant, Mel Gornick, she tells the detectives of Donny’s latest project, called The Wishers. The Wishers are a group of homeless individuals, recruited by a mysterious man named “Cap”, for Donny to photograph. The idea is that Donny will ask them what they “wished” to be when they “grew up”; possibly a doctor, or movie star, or even a fighter pilot. He then dresses them as their wishes and photographs them.  Described as naive and a gentle soul, Donny let these subjects in his home and paid them a large sum of money, and now one of them may have killed him.

Viktor, Donny’s father, is absent. Never a presence in Donny’s life. He has been married 6 times and had one child with each wife. The older siblings interact with each other, but only one of them has taken the time to get to know Donny. Is it a homeless person who killed Donny, or a member of the distant Klement family interested in getting a bigger piece of the inheritance? Alex and Milo zero in on the messy family as well as Donny’s “The Wishers Project” that brought strangers into Donny’s home.

Unnatural History is one of Kellerman’s more poignant books, focusing on the plight of the homeless and mentally ill on the streets of Los Angeles. They become privy to the plights and back stories of these unique individuals, who have somehow ended up with the shorter stick. The Author can humanize the plight of these characters in a way that the readers can relate to them and how badly they have been victimized. This is Kellerman at his very best. Just the dialogue between Sturgis and Delaware is worth it. But also, the depiction of Los Angeles is always the star.

Unnatural History is available at:
Amazon