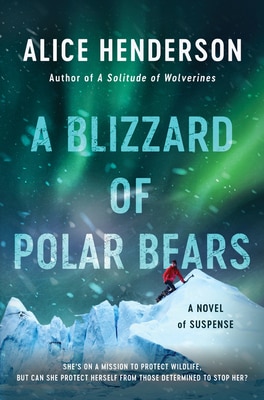 A Blizzard of Polar Bears

Alice Henderson has become my favorite author that emphasizes facets of nature in a crime thriller. A Blizzard of Polar Bears is the second book in the Alex Carter mystery series. After the opening scenes in northwestern Montana, the rest of the book takes place in and around Churchill, Manitoba, Canada.

Dr. Alex Carter is a wildlife biologist who is wrapping up a study on wolverines when a friend calls and asks if she would like to do a polar bear study in Manitoba. With two weeks left on her current assignment, she jumps at the opportunity. Her assigned research assistant, Neil Trevors, has lined up a helicopter pilot for them. Tracking the polar bears by air, Alex then tranquilizes, examines, and measures them. Taking samples for study in the lab in Churchill is part of the job along with updating or adding GPS trackers. However, things start to go quickly wrong. Their pilot suddenly quits and an intruder breaks into the lab, steals her samples, and deletes her files. After finding a replacement pilot, their helicopter catches fire and armed assailants come after them. One might think this would be enough to deter Alex from her study, but it isn’t, and this is only the beginning. Who wants to stop the study and why? Will Alex and Neil survive?

Alex is a likeable character who is three-dimensional and had depth. She is a skilled wildlife biologist, adept at Jeet Kune Do style of martial arts, and an expert shooter. She enjoys solitude, but has a few very good friends. She’s supported by an array of secondary characters that enhanced the story, but were not as fully developed. However, the relationships seemed believable and not contrived and provided the needed support or conflict.

The writing was so descriptive that I felt like I was with Alex as she carried out her research. The plot had some twists and turns and several surprises. It was engrossing, heartfelt, well-researched, and action-packed. I’ve seen comparisons to Nevada Barr’s Anna Pigeon series and I can see the similarities. The story was compelling, shocking at times, intense, and a great sophomore novel for the series. A gripping and dramatic ending was a little over-the-top, but it also tied up loose ends nicely. I enjoyed reading the Afterward that included information on the artic. The author also included a list of books and articles about polar bears as well as other reference information.

Overall, this combined mystery, nature, the environment, action adventure, and survival into one fantastic crime novel. Not only was this a fascinating mystery that kept me fully engaged, but I learned a lot about the polar bears, artic ice, and atmospheric conditions that Alex encountered. If you enjoy action-packed crime thrillers with an environmental and threatened wildlife theme, then this is a series to consider reading. I can’t wait to read the next book in the series.

William Morrow and Custom House and Alice Henderson provided a complimentary digital ARC of this novel via NetGalley. This is my honest review. Opinions are mine alone and are not biased in any way. Publication date was November 9, 2021.

A Blizzard of Polar Bears available at:
Amazon