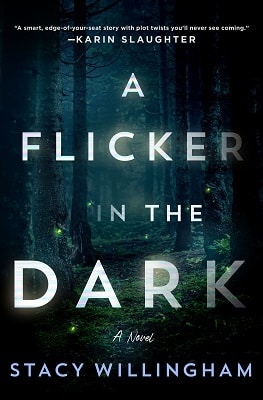 When she was twelve years old, Chloe Davis learned her father was the serial killer terrorizing their small-town home of Breaux Bridge, Louisiana. Now, twenty years later, girls are going missing again, and her darkest nightmares seem to be creeping from the shadows.

A Flicker in the Dark follows Chloe, further on now in life, but it’s clear the repercussions of twenty years ago are far from over, especially for her. Despite a successful psychology practice and the beautiful home she shares with her similarly impressive fiancé, there are cracks in the bedrock; she self-medicates with alcohol and prescription drugs, and there’s almost no one in her life she allows to see through the carefully constructed façade of perfection she presents to the world. She’s smart, though, curious and perceptive, and she made for the kind of protagonist that’s just so easy to root for.

We’re given time to get to know Chloe before the thriller aspect of the plot kicks in, as well as the people in her life – all of whom felt just as three dimensional as our heroine. I really appreciate an author who can make time to establish her characters like that without sacrificing the plot momentum; I never struggled to remember who was who, or what they were like, and I never had to flip back a page to recall a conversation. There was a comfortably natural feeling about the people in this book that is even more impressive coming from a debut novelist.

This book was a really impressive debut all round, actually – Stacy Willingham’s brilliant characters were backed up with a fantastically twisty plot that still managed to feel plausible. There were a couple of moments where the writing lost a little confidence and explained more than it needed to, but that’s common for new writers and something that I always give a pass to in a first book. Overall, though, this novel sits comfortably as one of the most enjoyable thrillers I’ve read this year. It’s entertaining, victim-focused without crossing into preachy, and I know that Chloe in particular is going to be a character I remember for a long time.