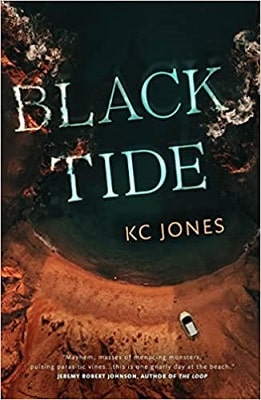 A cinematic slice of life and death on a coastal beach of Oregon brimming with tension, horror, anxiety, and dread.

Our main two protagonists, Mike and Beth, are deeply troubled and flawed characters. Beth, by her own admission is a “hot mess” seemingly always set up for failure. She is consumed by bad decisions and behavior; her life without true purpose and goals has come down to housesitting for her subsistence. Mike is a has-been Hollywood producer, mourning and grieving for the loss of wife a year ago—admittedly he acknowledges his failure as a husband and partner. A year ago, she went for a walk on the beach, and never came back … most likely finding her solution in the depths of the ocean.

Looking through her Nikon camera, Beth spots Mike over the fence wallowing his grief with champagne in a Solo cup. He appears disheveled with a scruffy beard and uncombed hair, and eyes that are noticeably red and glassy, probably from crying. Beth takes the initiative and introduces herself over the fence and invites herself to share the champagne.

One thing leads to another with both falling into bed in a drunken and uninhibited state. Mike awakens in the night and decides to end his pain by taking a long and final walk into the ocean.

He feels it was good to make a final connection with another human. As he traipses into the unforgiving ocean his plans are rudely short circuited. Overhead the skies light up with streaking lights and flashes and booming sounds and incredible crashes of bowling ball size objects plunging into the water. Up the beach, bright flashes occur followed by sounds like the earth is splitting in two. Then a sudden darkness occurs accompanied by a stench flowing through a breeze, with the foulness of rotten eggs. He returns to the beach house and awakens Beth, who awakens from a nightmare of sounds and images. They climb into his SUV with the aim of exploring the cause and results of these cataclysmic events.

They find an isolated pocket of people on the beach awaiting an incoming boat to hopefully sweep them to safety. Everyone is terrified and suspects an apocalyptic event with the invasion of multiple types of horrific entities. Mike and Beth scramble back into the Subaru, just as it receives a barrage of shrieking rage by invisible forces that dent and rock the vehicle.

(Beth calls them “streakers”). They note the “bowling ball” objects on the beach are sprouting virulent and twisted vines, seeking out to encompass and ensnare any passing object. What originally sounds like helicopters in the sky, turns out to be an incomprehensible mass of colors in a cloud-like formation with jellyfish tendrils, hanging down like long strands of spaghetti searching to grab onto anything in its path (“cloudfish”). The air was filled with tiny husks drifting downward like snow. All the strange creatures did not present a united front, with some opposing the others. There were groups of other blob-like creatures that when they opened their mouths, visible were rows of needle-like teeth and instead of a tongue, there was a worm-like thing that shot outward.

K.C. Jones crafts a masterful tableau of horror and impending doom and dread. Tension and anxiety inexorably escalates as Mike and Beth are trapped in their vehicle, as they are being pummeled by a multiplicity of horrors as the tide continues to raise, they have lost the keys somewhere in the surrounding sand. Explored are the changing relationships between Beth and Mike, as they battle insurmountable terror and the developing need for resilience and innovation to survive. World building and characterization are superb and viscerally propel the narrative to an exhilarating denouement. I would anticipate this becoming a hit feature for the big screen.

Thanks to NetGalley and Nightfire for supplying an Uncorrected Proof in exchange for an honest review. This debut for K.C. Jones will most likely be followed by a string of similar visceral expositions.