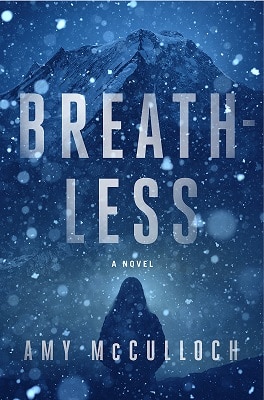 “Climb if you will, but remember that courage and strength are nought without prudence, and that a momentary negligence may destroy the happiness of a lifetime. Do nothing in haste; look well to each step; and from the beginning think what may be the end.”

–Edward Whymper (from Scrambles Amongst The Alps)

This roller coaster ride of a novel kept me breathless, with a full book hangover after reading the last page. The pacing, the details of climbing one of the tallest mountains in the world, and the addition of a serial killer tracking you on the mountain, had this reader begging for more.

Charles McVeigh has the extinction of being known as the world’s greatest alpinist. He is a legend because of his ability to climb 14 mountains without oxygen or using ropes. He is also a hero, having rescued climbers in danger. Charles will soon enter the record books as the first to climb 14 mountains over 8000 meters (approximately 5 miles up a mountain) without supplementary oxygen and the ropes attached to each mountain. He has accomplished this all within a year. Cecily Wong is a journalist writing for Wild Outdoors magazine. Charles has chosen her to accompany him on this last journey up Manaslu, the eighth tallest mountain in the world. If she makes it to the summit with him, she will get the interview of a lifetime. If she cannot make it to the summit, Charles will not grant her the interview. Cecily has seven climbers on her team, all of whom have climbed before. Breathless is told from Cecily‘s point of view and alternated with a blog she is writing for her editor.

While it seems like an impossibility for a new climber, Cecily believes she can make it to the summit. After the small team ascends the mountain, strange things start to happen. Their Wi-Fi is jammed everywhere on the mountain. She keeps hearing whistling outside her tent. There are also teams that have conflicts with each other. When Cecily does finally reach her editor, she finds her job is on the line, and her bitter ex-boyfriend has offered to take her place on the mountain.

There is obviously a lot of research about high level mountaineering gone into this book. In the Author’s note at the end, she talks about her preparation to climb Mount Toubkal in Morocco. In my opinion, the book would have been fantastic without the mysterious element. For someone who is severely acrophobic, the idea of walking up a mountain that is 5 miles high is unfathomable. The sheer grit of having to go on when you are struggling with breath, climbing ice walls on the edge of mountains, and the fear of falling into crevices, hidden by snow, is thrilling enough without the stalker element.

What I loved most about the book is the atmospheric descriptions of places we will never go. I was consistently putting down the book to google what these places looked like. Amy McCulloch did a fantastic job with her descriptions of the weather, the bitter cold, and the feeling of not being able to move another foot. It truly felt like we were climbing Mansalu with Cecily Wong. In Breathless, she combines creepiness, claustrophobia and the thrill of being on top of an 8,000 meter mountain. The characters surrounding her definitely feel secondary to her journey up the mountain. You can feel a sense of dread as they move farther up, and it is intense and horrifying. Without spoiling the ending, the journey to the summit eclipses the ending. Breathless is a gripping thriller.

Breathless is available at:
Amazon