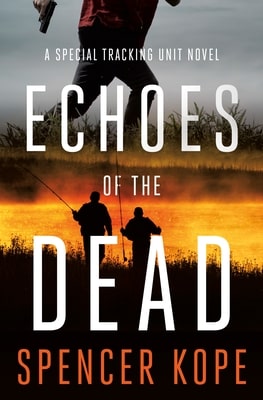 Echoes of the Dead

Spencer Kope returns with his fourth novel in this unique crime procedural series, using the abilities of two men to track people down using their own personal skills.

The Special Tracking Unit is known around the country for their abilities, but it is the work of Magnus ‘Steps’ Craig, who can see ‘shine’ that adds new depth to the investigation. This may be the more harrowing case yet, with dead ends and a mysterious undertone that connects all those involved. Kope keeps getting better the more this series progresses.

Four men have been enjoying an annual fishing trip for the past two decades. It’s a way to escape their daily lives and enjoy a little camaraderie. When they don’t check in at the expected time, families worry and calls are made. Due to the notoriety of one man on the trip, Washington becomes involved, which means a call to the Special Tracking Unit.

Jimmy Donovan and Magnus ‘Steps’ Craig comprise the Unit, working together to locate those who have gone missing. Steps has a special ability, seeing each person’s unique ‘shine’ or glimmer they emit, which helps with tracking and forensic progression. However, it’s also a detriment, as has become apparent in cases past. Together, they travel to California and begin their investigation, only to land in the middle of something odd.

When one of the victims is apparently found on a park bench, things soon turn baffling. It’s not actually the victim, but a man who has recently died and been buried. This body, having been placed in a coffin, is now out and wearing one of the missing men’s clothes. As Steps and Donovan follow the local authorities, it’s revealed that this has been a body swap and someone was buried alive.

Unsure what to make of the killer or their antics, Steps and Donovan must continue working, trying to hone in on anything, including shine, to get answers. After a second body is discovered, it’s a race to learn the motive and rationale. What may be a political connection could also be something completely different, which only complicates the investigation. Time is running out and the body count keeps mounting.

I discovered Spencer Kope’s books and could not get enough of this unique take on the crime procedural genre. There is something refreshing about a unique take, while still keeping the reader completely attached to the story. Kope writes well and leaves the reader eager to see what awaits in this non-stop novels.

Steps and Donovan surely take center stage in this piece, using their skills to track down not only the four missing men, but a killer with an axe to grind. While there is a little backstory when it comes to Steps, that is mostly a means of reminding readers what’s happened to him. Personal and professional growth is key in this novel, occurring throughout and keeping the series fan glued to what is to come. As the novels have progressed, I have become more attached to both men, eager to see what awaits and how they will progress.

Kope uses a strong writing style and sinister crime to lure readers into the middle of this piece. There’s nothing like a crime thriller to get the blood pumping, but it is the uniqueness of solving it that adds something special. A great narrative, with constant movement, helps catapult Kope to the top of the genre, while the story never loses focus on what’s important. One would not think that tracking the missing and those who have committed crimes could be so intriguing, though Spencer Kope has found a way, so much so that I cannot wait to see what he’s got coming in the future.

Kudos, Mr. Kope, for another winner. I can only hope that others will discover this series and find the same enjoyment.

Echoes of the Dead available at:
Amazon
Books-a-Million