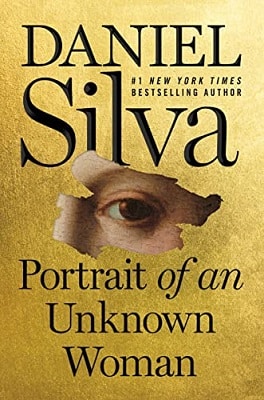 Portrait of an Unknown Woman

Has master Israeli spy and assassin, Gabriel Allon really retired? Or rather, has he merely switched occupations?

He embarks on an investigation into the provenance and authenticity of an old-master painting, “Portrait Of An Unknown Woman” attributed to Flemish artist, Anthony Van Dyck, while leaving a trail of deceit, conspiracy and multiple murders. Gabriel tries to retire to Venice with his beautiful wife, Chiara, and the twins, Irene and Raphael. His day consists of dropping off and retrieving his children from elementary school. He wanders the gorgeous streets of Venice, visiting the canal-side cafes, and the Rialto Market to fetch the ingredients for the evening meal. He reads voraciously, while listening to music, and occasionally painting “A Monet” or “A Cezanne.” Chiara insists he rest and not return to work; eventually she will allow him to start restoring paintings—his actual trained vocation.

Unexpectedly, a letter arrives in the post, beckoning Julian to a meeting in Bordeaux to discuss the painting. Julian, worried about the significance of the letter, arrives at the cafe as directed, only to be stood-up. The sender, Madame Valerie Berranger, apparently has had a fatal auto accident on the way to the meeting. Her cell phone was never found.

The collision was erroneously declared accidental by the local police. What kind of art dealer hires a professional assassin to kill someone in a dispute over a painting? Possibly one involved in a very lucrative criminal enterprise. Gabriel immediately is suspicious of authenticity and embarks upon an epic “sting” operation to expose, what he suspects is the greatest forger in history. His suspicions lead him to the Galerie Georges Fleury. He finds the owner and his assistant brutally murdered, while the gallery is subsequently fire-bombed.

Silva masterfully crafts a complex and twisted plot of deceit, betrayal, and conspiracy with the last third of the book effortlessly propelling the reader onto a roller coaster ride. Silva delightfully laces this tale with tongue-in-cheek humor, and reprises the roles of many of Gabriel’s beloved characters. Expertly the reprised roles are made seamless with the necessary backstory. The exhilarating denouement is punctuated with marvelous spy craft, deception, and murder. This compelling thriller will take us on a trip from London, to France, Spain and Corsica, where we will encounter, Sara Bancroft (ex-CIA officer), “Peter Marlowe” ( government officer and reformed assassin), Anna Rolfe (world famous violinist and paramour of Gabriel), and on Corsica; the Don, the Signadora, and certainly The Goat.

The art market is totally unregulated with arbitrary pricing and virtually nonexistent quality control. Most paintings change hands under conditions of secrecy. All of which make a perfect environment for fraud. Oftentimes a subjective process is used to determine the origin and authenticity of a painting. Miraculously a newly discovered painting emerges from a previously “unknown collection.” Obviously these beautiful and culturally significant paintings should not be treated as commodities, like soybeans or pork bellies. By one estimate, at least twenty percent of the paintings in the National Gallery of London are misattributed works or outright forgeries. Will Gabriel be able to take down this massive criminal enterprise, backed by perhaps the greatest forger in history?

Thanks to Harper Collins Publishing for providing an early copy of this gem, in exchange for an honest review.

Portrait of an Unknown Woman available at:
Amazon