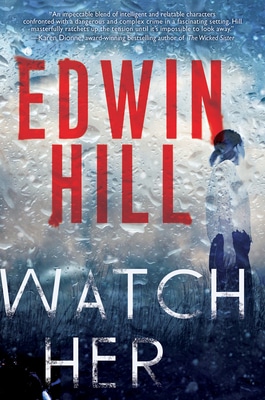 Before you start reading Watch Her by Edwin Hill, you may want to grab a cup of coffee or tea; better yet, make it a pot. From the opening sentence this book draws you into the story and the characters, all of whom are well drawn and complex.

This is Hill’s third novel in the Hester Thursby series and the best one yet. The chapters are short, and the story is so engaging, it’s easy to say “just one more chapter” several times before you realize you’ve read half the night away.

The book has the same recurring characters as earlier books in the series, most notably: Hester, the pocket-sized researcher who has a habit of uncovering murders even when her research begins as something else; Morgan, Hester’s non-husband and handsome veterinarian; Angela, friend, police detective and lesbian; Jamie, friend who joined the cast a book ago; and Kate, precocious five-year-old niece to Morgan who lives with Morgan and Hester. It also has new characters, most of whom will be central to this story. There’s Maxine, the unacknowledged driving force behind Prescott University, a for-profit art institute. Central to the story are the Matson family. owners of the university including Tucker, the father, Jennifer, the mother, Vanessa the daughter, and Gavin, the son-in-law. Finally, there are a few students who are also main characters including Barret and Libby. Don’t worry about keeping them separate in your mind, they are so well drawn it’s easy to picture each one individually as you encounter them. Information is spooled out through the novel, so you don’t get a huge amount of data initially that you feel compelled to remember. Also, the chapters rotate between Hester, Barret, Maxine and Angela and help to keep the story straight and propel the reader through the book.

While the book is the third in a series, you do not need to have read the first two to follow this story. Don’t be surprised, however, if you find yourself going out to get the first two because this one was so good and because you want to read about the few situations that are continuations in the lives of Hester, Morgan and friends. No matter what order you choose; relax and prepare to become a fan of Hester, an unconventional protagonist.

In this book, Hill is not content to present just one mystery, but several. It begins in 1997 with a tragedy the Matson’s experience. As a result, Jennifer spirals into depression and now lives entirely indoors with two dogs and a bottle of vodka her only companions. Other story lines include Gavin and the hold he has over some of the students as well as the question regarding what he’s doing to enrollment; the reported “break-in” at the house and the discovery of the book “Adam Bede” in an upstairs study; and Barret’s recurring theme of seeking love and acceptance for who he is. Each chapter provides a bit more information in the revelation of the overall story from that character’s point of view as well as how they fold into the story as a whole.

The threads begin to intertwine, as Hill shows the reader the university expanding its holdings once again, courtesy of Maxine’s vision although credit is once again being given to Vanessa, heir apparent to the Matson legacy. Vanessa’s husband, Gavin, is introduced early as a smarmy character who is only out for himself, with some sort of hold over Barret and a few other students. Hester is drawn into the mix when Maxine, who meets her at a university function, asks her to do some research into a list of missing students Gavin has given Maxine. This sets Hester up to follow additional questions and leads to additional intrigue and ultimately murder.

The book is told in chapters that rotate through Hester, Barret, Maxine, and Angela. There are clearly marked sections labeled with dates, so the reader knows exactly where they are in the story. The clarity of writing along with this clear labeling of time and person make it easy for the reader to follow the story as they read. The conclusions to the various threads are completely satisfying and feel as if they have been reached in a logical, timely way with just enough things remaining open-ended to allow the reader to draw their own conclusions in some instances.

My thanks to Kensington Books for providing me with an advanced copy of this book for review. The opinions expressed here are entirely my own.