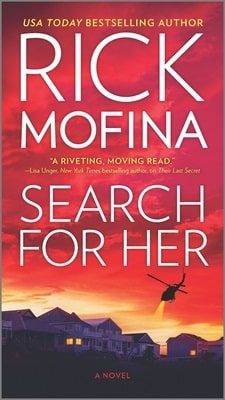 Search for Her by Rick Mofina catches the reader from the very first page with unique prose, interesting characters, and quick action.

Grace Jarrett and John Marshall are moving across the country with Grace’s 14-year-old daughter, Riley, and John’s 17-year-old son, Blake. Theirs is a blended family, both having lost spouses in tragic accidents five years ago. John has accepted a better-paying job in Pittsburgh and is moving the family from San Diego. But what represents a new start for the family has Riley angry and upset, forced to say goodbye to her friends and break up with her much older boyfriend, Caleb. Blake, at seventeen, seems indifferent. But their trip starts off with arguing as Grace confiscates both teens’ phones so they can look at scenery.

The Silver Sagebrush is a huge truck stop, with a casino, hotels, restaurants, and shops. Thousands go in and out by the hour. When the family stops there to use the bathrooms, Grace allows Riley to keep sleeping, leaving a note as the family goes inside. When they return to the RV, they ask Blake to check on Riley, which he doesn’t do but assures Grace she is fine. When Grace checks on her after they have driven about an hour, she realizes Riley is not there. Chaos ensues.

As John frantically tries to find a place to turn the RV around, Grace frantically calls the Silver Sagebrush to have Riley paged. Unfortunately, an irate driver, cut off by the huge RV, tries to get in front of them and it forces them off the road into a terrible accident which totals the rental vehicle. The fast pace of this mystery leaves the reader wanting more, as secrets reveal themselves and red herrings appear.

Search for Her is both a mystery, as it draws the reader into the secrets this family holds while searching frantically for Riley. The constant action and introduction of new characters and new twists kept this reader on her seat, finishing the novel in one day. As the Silver Sagebrush is one of the largest rest stops in the country, the investigators know that anything could have happened to Riley, including kidnapping, trafficking, or murder. From the very beginning, the family is suspect, and it leads the reader to believe they may be involved in her disappearance.

Search for Her is fantastic. Sure, all the characters are well developed and interesting, but really it is the non-stop action that makes this book unputdownable.