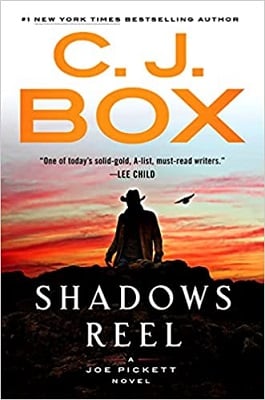 C. J. Box continues to excite readers with unique mystery thrillers that are full of suspense and action. The twenty-second book in the series featuring Wyoming Game Warden Joe Pickett is full of multiple discoveries happening around Thanksgiving.

Joe gets a call about a dead moose that turns out to be much worse. A local fishing guide has been murdered. Meanwhile, Joe’s wife, Marybeth, finds a package at the front door of the library where she is the director. It contains a photo album that has photos of German officials from 1937. Who left the book and why? Meanwhile Joe’s friend, Nate Romanowski, is hunting for the man that stole most of his falcons and killed three others. He also attacked Nate’s wife and threatened his daughter. Nate uses a network of fellow falconers to track the man from state to state until there is a final show down. When the two investigations put Joe and Marybeth and their family in danger, Joe is determined to find the culprits and answers the call to help Nate.

Readers get a good feel for Joe and Marybeth. Their characters have depth and are well described. She plays a much bigger role in this novel and it was great to see how her research provided much needed knowledge for one of the cases. We also get caught up with the lives of their three daughters. Joe works with the local sheriff and deputies, but, as usual, does some investigation of his own. The antagonists are known early in the novel to the readers so there is no mystery about who they are. It’s more about why they have done it. The supporting characters provide support, humor, and conflict to enrich the reading experience.

The writing is fluid and descriptive which helps readers envision the scenes without disrupting or slowing the flow. However, a few of the scenes are somewhat graphic. Despite Nate’s part of the story having a lot of suspense and action, it seemed to detract from the main story line for me. There was a strong sense of place causing me to feel as though I was living the events alongside the characters. The final action scene is somewhat over-the-top. Themes include violence, murder, theft, assault, Germany in 1937 and later, and much more.

Overall, this was entertaining, suspenseful, and an action packed ending with compelling characters that kept me turning the pages as I sat on the edge of my seat. With exciting scenes and fascinating dual story lines, it captivated me. I’m looking forward to reading the next book in the series. Will one of the daughters get their own series? It seems like April could be featured in one.

PENGUIN GROUP Putnam, G.P. Putnam’s Sons and C. J. Box provided a complimentary digital ARC of this novel via NetGalley. This is my honest review. Opinions are mine alone and are not biased in any way. Publication date is currently set for March 8, 2022.