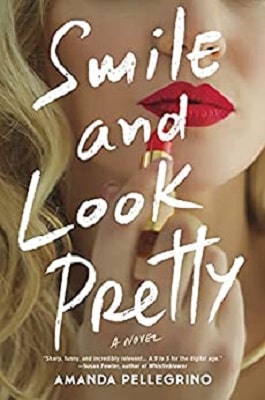 Amanda Pellegrino’s debut novel, Smile and Look Pretty, is what happens when the famous movie 9-5 meets the #metoo movement. Lauren, the assistant to a head writer of a workplace comedy, has a big job getting coffee. It was a clear ladder to her dream of being a writer for a television series. But it’s been three years, and not only have they have passed her up for promotions, she has also been the subject of sexual harassment by another writer. A writer who has is rehired after being let go after she reported him for sexual harassment. Cate has her dream job at Larcey Press, working as the head editor’s assistant. She is officially the longest lasting assistant in Larcey history. It is her two-year anniversary and while she has done no editing; she does deliver her boss’s cupcakes to his child’s school party and makes his travel plans for a $37,000 safari while she can’t afford to go home for Christmas. Max works at the Good Morning Show, as an assistant to anchors Sheena and Richard (think Savannah and Matt) but every day she has to put up with Richard making lewd comments and pinching her butt. When she says something to the assistant producer, he tells her to keep it on the down low. Olivia keeps a running tally on her phone of how many times she has seen her boss’ penis, a c-list actor who hasn’t worked in a long time, in the three years she has worked for him.

Best friends Cate, Lauren, Olivia and Max have a weekly calendar date called “the shit list,” where they meet and discuss all the outrageous things their bosses have asked them to do over the week. Cate decides their weekly date isn’t enough. She presents the idea of a blog called “Twentysomething” where assistants all over the country can submit their own stories. They become the Aggressive One, the Bossy One, the Bitchy One and the Emotional One. Almost immediately, women are submitting their stories of sexual harassment and bad bosses. The blog quickly goes viral. When the four girls find out someone is trying to expose them, they find a way to control their own narrative. What follows is a fast-paced and frenetic race to reveal themselves, and what truly becomes the best part of the book.

As an assistant to a publisher at my first job many years ago, I was delighted to read this. Of course, a non-fictional version of this story has been told in the media for the last three years, officially canceling figures such as Matt Lauer, Kevin Spacey and Harvey Weinstein. It is hard to believe this is Amanda Pellegrino’s debut novel. Cate, Lauren, Olivia and Max are so self-aware, and their complex friendship with each other really shines brightly. The reader is rooting for them throughout the entire novel.

Smile and Look Pretty is available at:
Amazon