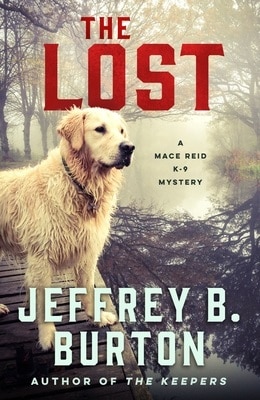 The Lost by Jeffrey B. Burton is the third book in the Mace Reid K-9 Mystery series. Burton has managed to seamlessly combine an amateur sleuth mystery with a police procedural that also highlights relationships between dogs and people as well as showing the dark side of people and how that can affect others.

Mason (Mace) Reid lives outside of Chicago and trains dogs with various end goals such as obedience and missing persons tracking, as well as searching for drugs and explosives. However, his specialty is training dogs in human remains detection (HRD or cadaver dogs). He is often called in to help the Chicago Police Department, local sheriff’s departments, and occasionally, the FBI.

He and his golden retriever Vira are called by Special Agent in Charge Len Squires to Glencoe, Illinois. During a home invasion, billionaire financier Kenneth J. Druckman was assaulted and his wife, former supermodel Calley Kurtz, and his daughter Eleanor were abducted. Vira seems to have an uncanny edge that borders on the paranormal in her ability to locate not just the dead bodies, but also their murderers by latching on to their chemical signature at the murder site. What follows is a terrific mystery with lots of action, twists and turns, a little humor, and some fantastic moments with Mace’s family/pack; his dogs and Chicago homicide detective Kippy Gimm.

Mace is a compelling and well-developed character with flaws that have led to a divorce and a job change. It was great to see some of the secondary characters show up again in this book and gain some depth. Additionally, the canines have been well-developed and their personalities came through as the story progress. They aren’t just an afterthought, but play important roles in the series and have distinctive personalities. It was also great to see the relationship between Mace and Kippy continue to develop.

The writing style is engaging, but also has an intensity to it that kept me turning the pages. The plot was clever, intriguing, creative, and intense. The final twist caught me by surprise. There were aspects that I did not see coming even though there were enough hints that I conceivably could have deciphered it. Like in previous books, the bonds between Mace and his five dogs continue to be a highlight and provide some humor. Themes include murder, abduction, assault, corruption, and relationships. My one quibble with this book is that there were some flashback scenes that interrupted the flow of the story for me. While I recognize why they were included, it still affected my reading experience.

Overall, this was an entertaining and suspenseful novel and a great continuation of the series. I look forward to seeing what is next for Mace and his pack. Additionally, I want to read this author’s FBI Special Agent Drew Cady mystery series starting with The Chessman.

St. Martin’s Press – Minotaur Books and Jeffrey B. Burton provided a complimentary digital ARC of this novel via NetGalley. This is my honest review. Opinions are mine alone and are not biased in any way. Publication date is currently set for June 28, 2022.

The Lost available at:
Amazon