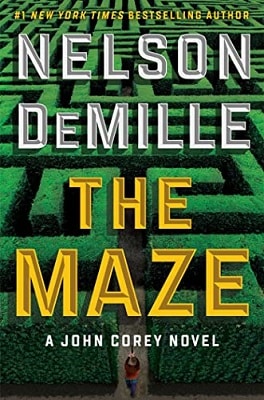 OK, I admit it, reading Demille’s 8th John Corey novel is a guilty pleasure. It’s like eating a whole box of Godiva chocolates without coming up for air. And, like chocolates, you can never get enough.

This continues the saga of the rogue, smart-ass cop that is addicted to risk and peril. He’s been called a “shitstorm magnet.” John is also known for his politically incorrect humor and sarcastic, but on-point patter. Even though this is the eighth entry into this series since his auspicious 1997 debut in Plum Island, this novel can be enjoyed and devoured as a standalone since Demille masterfully weaves into the narrative the necessary backstory.

John actually is unemployed, since he was asked to cease and desist from his last Federal gig with the Diplomatic Surveillance Group (DSG). Apparently, due to his somewhat rogue and excessive actions, the SVR (the Russian Foreign Intelligence Service) is gunning for him. This only adds to agencies trying to eliminate John. There are many Islamic terrorists gunning for him for pay-back during his days with the ATTF ( Anti-Terrorist Task Force), not to mention the multitude of adversaries acquired when he was a NYPD homicide detective.

We find John convalescing after taking three shots to the chest, with a month long hospitalization at Columbia Presbyterian. He’s trying hard to do nothing at his Uncle Harry’s waterfront summer house on the North Fork of Long Island. His duties are frequently lifting a beer bottle and a copy of a Nero Wolfe mystery. A rude knock on the door reintroduces a previous “old flame,” Suffolk County Homicide Police Detective Beth Penrose. After verbal jousting an unusual job offer is presented. Since he’s presently unemployed she and her boss, Sylvester Maxwell (call me “Max”) thought it would be a great opportunity for him to work as a private investigator for Steve Landowski at Security Solutions, here on the island. Max is an old friend who John worked with on a double homicide (during the Plum Island novel). Steve would apparently like to meet with him to discuss working for him. John is thinking he’d rather have a visit to the dentist, for a root canal.

However, his uncle just informed him that he rented out his summer house for July and August for sixty thousand and needs John to vacate the premises—and he remembers that Beth has a cottage close by. In the past this was the site where they “screwed their brains out.”

John ponders. Well, I need a summer job, a summer house, and a summer love. So maybe this could work out. John listens to Beth and will listen to Steve, “because as every detective knows that listening to bullshit is part of the journey toward enlightenment.”

During the course of listening to bullshit, an interesting, funny and entertaining interlude occurs commenting on idiotic expressions that John can’t stand—most irritating is the use of “no problem,” a catch-all for “welcome,” “that’s fine” etc.

John meets with Steve Landowski at his place of business, the “Farmhouse,” which some refer to as the Animal House. The second floor features a large “playroom” where Poker Night and Thirsty Thursdays are held. Thirsty Thursdays features exotic “dancing girls” and is attended by local cops and politicians and even judges. There are also several bedrooms, which Steve refers to as the ‘honeymoon suits.” Steve’s generous hospitality wreaks of possible corruption and probably blackmail. Beth and Max later inform John that a previous employee, Sharon Hite, working as a PI, committed suicide under very dubious circumstances.

She was working the missing persons case of Carolyn Sanders, whose street name was “Tiffany,” and probably worked the second floor. Her naked body along with eight other women where eventually discovered after being dumped like garbage on Fire Island. This was the site of a horrendous unsolved mass murder case. It was obvious to John he was to function as an undercover informant, a mole at Security Solutions. In John’s estimation, Steve Landowski was a dangerous combination of stupid and cunning, along with an equal touch of sociopath and psychopath, and driven by ego, libido, and money.

Nelson Demille proves to be an excellent storyteller as he weaves an intricate plot with multiple twists and turns and unexpected reveals that culminate in an exhilarating denouement that features a chase that will have the reader on the edge of their seats…. as tension and intrigue reach a boiling point. Demille once again shows his mastery with dialogue and character development involving his multiple multidimensional characters. This case has lots of twists and turns with many beginnings and no end in sight.

Thanks to NetGalley and Scribner Books for providing an Uncorrected Proof in exchange for an honest review. Hopefully will continue to entertain us with further exploits of John Corey.

The Maze available at:
Amazon