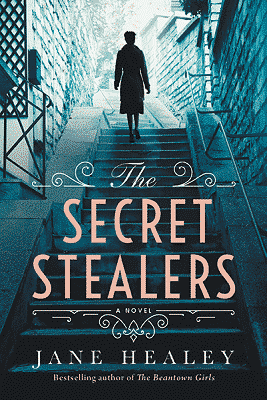 Anna Cavanaugh is a recent widow, working as a French teacher in Washington, D.C. When a family friend, General William Donovan, reaches out to her and invites her to join the Office of Strategic Services, Anna’s life is completely turned upside down.

Soon, she is working behind enemy lines in France, clandestinely communicating with London about the Germans’ plans. In constant danger, Anna and her female colleagues concoct rescue missions and reveal weapon blueprints to the home front, while at the same time trying to keep their real identities a secret.

Historical suspense author Jane Healey returns with her newest novel, The Secret Stealers. Full of intrigue, suspense and patriotism. It pulled me in from the first page.

Anna is an honest and realistic character, while at the same time being exceptionally brave and true to herself. Desperate to make a difference in the world, she takes on the biggest challenge of her life, despite the danger, and despite the attitudes toward women both at home and abroad. With the help of her friends, Anna is able to confront her fears and doubts, and change the war effort for the Allied forces. There is an immediate bond formed with Anna, and right away I wanted her to succeed. She is relatable on every level, a “typical” female doing a “typical” job, who is called to action in a huge way. This is literally the stuff that dreams are made of.

The story takes place mostly abroad, particularly in London and France, and Healey describes the beauty of these countries, but also the destruction caused by the war, in an immersive and captivating way. I was right there with Anna, as she biked the dirty streets of France, and traveled in the back of a tiny plane on her way to London.

Healey’s novel is well-researched, as she details in her author’s notes, and the fact that some of her characters were based on real-life people makes the novel even more awe-inspiring. Although The Secret Stealers is full of dangerous and clandestine missions and is laden with destruction and death, it also manages to be uplifting and inspiring.

The bittersweet and emotional ending concludes the novel perfectly. There are tear-filled reunions, nostalgic memories, and positive feelings about the future, which is exactly what you’d expect from a World War Two novel. As realistic and heart-wrenching as The Secret Stealers is, it highlights the bravery and strength of the participants, of both genders, and reignites a faith in humanity.

A German immigrant becomes embroiled in a Nazi spy ring

END_OF_DOCUMENT_TOKEN_TO_BE_REPLACED

An engineer, an affair, and the Nazi rocket program