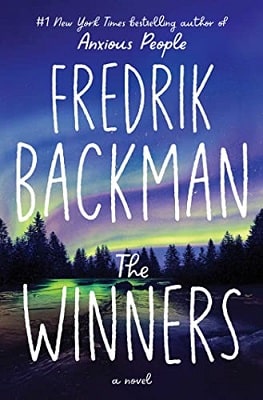 Finally comes the third volume in Backman’s masterpiece involving “Beartown;” the anxiously awaited conclusion to the saga involving a trove of beloved characters plus a host of new relevant characters.

What hasn’t changed is the lifelong rivalry and hostility between the two neighboring forest towns of Beartown and Hed. Although this is the third volume, it can still be enjoyed and devoured as a standalone due to Backman’s seamless interwoven backstory. Because of the wonderful style of his flowing insightful prose it is easy to follow the complex interwoven storylines connecting the multitude of multi-layered characters.

We soon learn that good people are capable of evil when pressured and evil people can unexpectedly surprise with goodness. Explored will be many of life’s endless quandaries and emotions: friendship, love, corruption, politics, money, power, abuse, rape, hypocrisy, rage, family, parenthood, and community. It truly is amazing the breadth and depth of social issues that are dealt with in this moving and profound story, The narrative effortlessly glides through one heartfelt moment to the next. Male and female readers alike will often be brought to tears of sadness and joy.

The novel begins with a tumultuous storm tearing through the forests bordering the two competitive towns of Beartown and Hed. The squall brings epic wind gusts and snow resulting in uprooted trees, closed roads, and destroyed buildings, including the collapse of Hed’s hockey rink roof, along with chaos and deaths in both towns. During the storm, crazy and wild Ana (best friend of Maya) drives her drunk father’s truck through insurmountable obstacles to help a midwife from Hed (Hannah) to save a woman, who is giving birth in a stuck vehicle. Stories of daring rescue will abound, however in the aftermath the death of one individual will have far-reaching effects on both towns. Momentarily both towns will pull together to mourn a common loss. It also will bring back home two of our main beloved characters, Maya Andersson and Benji Ovich.

Maya was victim of rape by Kevin Erdahl, a hockey star for the Beartown club. She bore the wrath of the town. How dare she accuse the star of their beloved team, of such a heinous act? Surely it was her fault. Why should he not continue playing? Benji Ovich was the best friend of both Kevin and Maya. He was the team’s enforcer and protected Kevin on the ice.

His life was left in turmoil, once the town became aware that he was gay. Independently both Maya and Benji left Beartown. Maya left to pursue her life’s passion at music college, while Benji left for Asia to pursue drugs and alcohol, in a setting devoid of hockey. They both return in respect for the death of beloved Ramona—barkeeper and owner of the Bearskin Pub—the essential meeting place of the Beartown community. Their presence will alter the dynamics of the competing towns, which encompasses not only the hockey clubs, but also the social and economic fabric. The struggles and confrontations involving both towns intensify in the aftermath of the storm. Tensions flare and grow, even resulting in fights involving the neighboring spectators attending the junior hockey game. It’s rumored that Hed hockey team will be shut down because of the collapse of their rink’s roof and their financial troubles. It’s also rumored that the local paper ( located in Hed ) is investigating corruption and possible embezzlement involving the Beartown hockey club. Animosity escalates as violence flares.

Central to the story is not only the importance of community, but more so the overwhelming need for family and friendship. One of the most important new characters is Alicia. A seven-year-old abused girl from a poor broken family. She possesses an extreme degree of talent and desire to play hockey. She will be nurtured and loved by many of our beloved main characters, including Sune, the retired hockey coach, and Peter, the team’s previous general manager ( and former team player, and NHL player). Peter since leaving the team is having a difficult time in finding meaning and purpose in life. His marriage with Kira, his lawyer wife, is in turmoil. Many secrets remain between the two, as they drift apart.

Fredrik Backman masterfully weaves a multi-layered complex story with multiple converging plot lines, that escalate in tension and intrigue and culminate in a heart rendering denouement.

Explored are many opposing circumstances: fierce love by mother and father, as opposed to abuse and neglect of children, revenge or forgiveness, courage and cowardice, many and variable emotions abound: love / hate  and joy / sadness.

I savored this novel, dreading to say goodbye to so many old and new amazing characters. Even though this is supposedly the conclusion, hopefully Backman will explore in future novels the lives of Alicia or Ana. Their further trial and tribulations are begging to be told.

Thanks to NetGalley and Atria Books for providing an Uncorrected Proof in exchange for an honest review.

The Winners available at:
Amazon