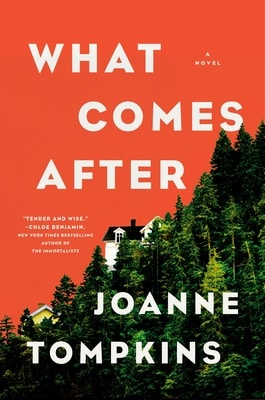 Occasionally, a book comes along that overpowers you and makes you think about things in a way you haven’t in the past. Things such as homelessness, teen pregnancy, and the complicated relations of families and neighbors. What Comes After is this book.

Evangeline has moved to the small Washington town of Port Furlong with her mother. They live in a double-wide on the edge of town. When her mom decides she has had enough, she leaves $200 for her daughter and leaves town. Within a few weeks, Evangeline is homeless and pregnant, having met two boys in a park previously. When she reads about their murder/suicide and finds out that the father of one of the boys is living alone with his dog, she comes up with a plan. Isaac Balch is grieving both the death of his son, Daniel, and the departure of his wife, who had left him nine months before for the man she had an affair with. Lorrie, Isaac’s next-door neighbor, is grieving the loss of her son, Jonah, accused of the murder of Daniel, his best friend.

Shortly after Jonah and Daniel’s deaths, Evangeline is found sleeping outside of the Balch house by their dog, Rufus. Isaac invites her to stay, not knowing her association with his dead son. As Evangeline grows and thrives under Isaac’s care, she makes a strong connection with Lorrie, but Lorrie and Isaac cannot find a way to each other. As secrets come out about her relationship with both boys, Evangeline is worried about losing everything she has fought for, including her home with Isaac.

What Comes After draws you in from the first page. As the reader gets bits and pieces about what really happened to Jonah and Daniel, we savor all the details until the shocking conclusion. All the characters are well developed and relatable in a way I don’t see very often. The book alternates points of view between Isaac, Jonah, Lorrie, and Evangeline. The dog, Rufus, is also very prominent in the story, as a dog who knows things.

Warning: there are some very sensitive topics in this book including rape, animal death, teen pregnancy, and suicide. The author’s portrayal of loss is spot on. It helped the reader connect with each of the characters, all experiencing very real losses.

Religion, particularly the Quaker faith, is prominent in the book. Isaac has been a Quaker all his life and how he grieves is very connected to the Quaker faith. As a reader, I am not normally attracted to religious books, but it was fascinating to learn about the Quakers and their silence and other aspects of their religion. What Comes After is literature and mystery, a bit of supernatural and religion woven into an amazing essay on our times.