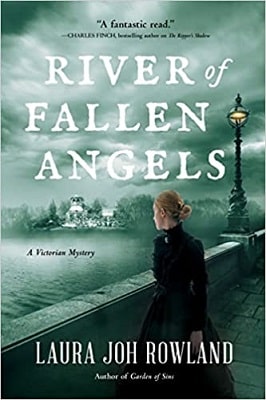 Sarah Barrett is a crime photographer for the Daily World newspaper in Victorian London. Together with fellow journalists, Mick (a former street urchin) and Lord Hugh Staunton (making his own living after being disowned by his family) they have been successful before in solving several crimes and catching murderers, including one very notorious case that they can never talk about.

It’s now April 1891 and while photographing the rescue of a workman who fell off the construction of the Tower Bridge, Sarah spots the dismembered torso of a woman in the river. It’s the fifth such torso found in the Thames since 1887 and the police suspect a serial killer, nicknamed the Torso Murderer, has been quietly active in London, overlapping with Jack the Ripper’s reign of terror. To date only one of the women had been identified so nothing is known about how or why the murderer chose their victims.

Sarah is newly married to Thomas Barrett, a detective sergeant of the Metropolitan Police. He has been appointed to a task force to investigate the Torso murders, headed by Inspector Edmund Reid. Unfortunately Reid despises Sarah for what he considers her past meddling in his cases and is convinced that she is keeping information about Jack the Ripper from him. To keep Thomas away from the case, Reid assigns him to the morgue to guard the body and collect the names of those looking for missing women who come to view the corpse. However, this only strengthens Thomas and Sarah’s resolve to conduct their own investigations along with Mick and Hugh and Sally, Sarah’s half-sister and junior journalist.

Hugh has a list of shady suspects he investigated while looking for Jack the Ripper, who he could tell were hiding something and wants to follow up while Sally and Sarah chase up ads for missing women placed in the newspaper by those looking for them. One such missing woman, leads them to a cultish church called the Haven of Love, presided over by the charismatic Reverend Patrick Eden-Smith. Although there is nothing to suggest he is a murderer, Sally’s instincts tell her something is not right with this man and his adoring female followers.

This is an interesting case with everyone having their own theories on who the murderer could be. Reid is convinced that Jack the Ripper is also responsible for the torso murders, even though the actual killings are quite different, while Sarah and Thomas disagree with each other over the likely suspects. The pace is fairly steady, flagging somewhat in the middle when the case stalls, but then picking up pace again as connections are revealed and reaching a surprisingly frenetic conclusion. Perhaps, because this is now the seventh novel in the series, there wasn’t a strong sense of the place or era of its Victorian London setting and it could almost have been a contemporary novel, especially given that the characters have quite liberated lifestyles for the period.  However, that aside, it’s an intriguing mystery and a good addition to this series.

With thanks to Crooked Lane Books via Netgalley for a copy to read.

River of Fallen Angels is available at:
Amazon