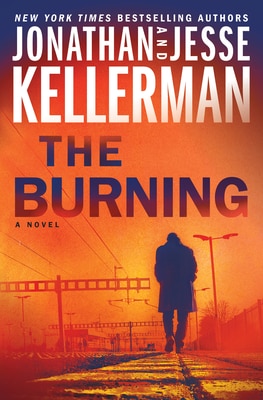 “The Apocalypse smells like a campfire and glimmers gold.”

Set against the wildfires of California, Jonathan Kellerman and his son Jesse have done it again with the 3rd installment in the Clay Edison series; mind-blowing! In The Burning, the Kellermans take us right into the California wildfire season and the reader definitely feels the heat!

When The Burning begins, they are already two days into a power outage which has paralyzed the community. Clay, a coroner in Oakland, Ca. is called to the murder scene of a wealthy entrepreneur, Rory Vandevelde. When he is walking around the house, he finds a garage with 30 or more luxury cars and against one wall – his brother’s late sixties Camaro, specifically a 1969 SS/Z28, painted a particular shade of green with black racing stripes. Now he knows his brother may be involved and Clay is determined to find Luke, a reformed drug-addict and released prisoner, and see what he knows. He then does the unthinkable and erases all fingerprints from the car to protect his brother. A move that could cost him his job.

In true Kellerman form, the wildfires present an eerie backdrop to the story, with extended power outages and thick grey smoke everywhere. Clay, in his quest to find his brother, puts his job and his life at risk and though he didn’t know the murder victim, it hits very close to home. He meets obstacles at every turn, including Luke’s new wife Andrea, who refuses to give Luke any information and Luke’s boss at the Cannabis company, who is immediately suspicious of Clay and his intentions. Although he is not telling her the whole truth, Clay’s relationship with his wife, Amy, newly pregnant, is delightful to watch and listen to.

The Burning keeps you on your toes until the very last chapter. We get a closer look at the relationship between Luke and Clay, including why it has deteriorated to the point it has. We see that Clay will do anything to find his brother, including breaking the law. This book is more than a murder mystery. It is a search for the brother you don’t necessarily like but love. You can almost feel how hot it is and the smell of the air where Clay has been summoned to find his brother. Grab a cool drink and sit by air conditioning as you read the last pages of this amazing novel.